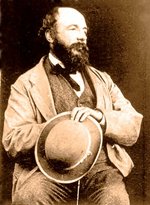 In 1849 John Caldwell Bloomfield inherited the Castlecaldwell estate, which encompassed the village of Belleek, from his father. Mindful of the plight of his tenants in the aftermath of the potato famine he sought to provide some form of worthwhile employment. An amateur mineralogist, he ordered a geological survey of his land. To his delight it revealed the necessary raw materials to make pottery – feldspar, kaolin, flint, clay and shale.

The village of Belleek, whose name in Gaelic, beal leice, translates to ‘‘Ford of the Flagstones’’, was a natural choice to locate the business, especially the part of the village known as Rose Isle. This small isle provided the best opportunity to unleash the yet untamed power of the River Erne – power to drive a mill wheel strong enough to grind components into Slip, the term applied to liquid potters clay.

Bloomfield acquired partners in the venture, Robert Williams Armstrong an architect from London but originally from Co. Longford who had an abiding interest in ceramics, and David McBirney, a wealthy Dublin merchant and owner of the drapery firm of “McBirney & Collis” of Arran Quay.

Next he pulled strings, lobbied and practically paved the way single handedly for the Rail Service to come to Belleek. By rail, coal could be brought in to fire the Kilns and the finished Belleek product could be sent to market with ease.

Raw materials, power, capital and transportation all in place, plans for the construction of a pottery building were drawn up. On Thursday 18th November 1858 Mrs Bloomfield laid the foundation stone. 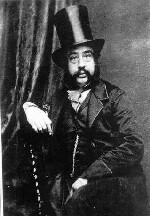 Young apprentices and capable workmen were to be found locally but Armstrong, knowing that the Pottery’s success hinged on talented craftsmen and experienced Potters, went to England. Offering high wages and a better lifestyle he brought back 14 craftsmen from Stoke-on-Trent.

The Pottery’s early production centred on high quality domestic ware – pestles, mortars, washstands, hospital pans, floor tiles, telegraph insulators and tableware. However from the beginning Armstrong and McBirney wanted to make porcelain not only to utilise the available mineral wealth but also to give full scope to the craftsmanship quickly developing in the pottery. Their early attempts failed and it was not until 1863 that a small amount of Parian was produced. Even though the knowledge and skill to create Parian had been gained, earthenware remained the principal product at Belleek until 1920.

By as early as 1865 the company had established a growing market throughout Ireland and England and was exporting pieces to the United States, Canada and Australia. Prestigious orders were being received from Queen Victoria, the Prince of Wales and the nobility. Porcelain was featured by Belleek for the first time at the Dublin Exposition of 1872. Their display was the largest in the Irish and English industrial areas. Among the pieces listed in the catalogue for the event are Parian china statues and busts, ice buckets, compotes and centrepieces.

McBirney died in 1882 and Armstrong in January 1884. A group of local investors acquired the property and a new venture the Belleek Pottery Works Company Ltd began trading in August 1884. The new Company officially acquired all the property. 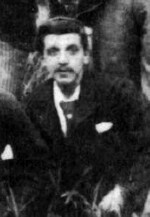 In 1893 Belleek acquired one of its finest master craftsmen Frederick Slater, who came from Stokeon- Trent in England. He took charge of the design department and remained in that role for the next forty years.

It is believed that he modelled the much honoured international centerpiece which stands 28’’ tall, it was awarded a Gold Medal at the Paris Exhibition of 1900. This piece is on display at the Belleek Visitor Centre. 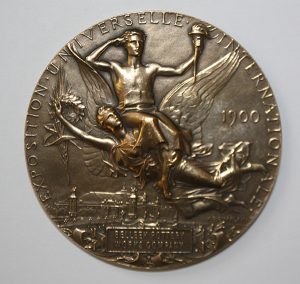 Belleek struggled through the First World War years with restrictions on exports taking their toll. The order books dwindled and did not recover and in 1920 Bernard O’Rourke, a prominent mill owner in Inniskeen and Dundalk acquired the business for £10,000.

Soon after the Second World War two new Allport kilns were installed needing only nine tons of coal instead of the nineteen tons previously used by the old bottle kilns. For the first time Belleek concentrated all their efforts on the production of Parian. The company could barely keep up with orders and in 1952 Belleek installed its first electric kilns. It was the beginning of a new era and in 1966 the company modernised its production and replaced many of the old workshops. However by the late 1970s tastes were changing and the Pottery experienced many ups and downs culminating in the sale of Belleek Pottery Limited in 1984.

The Pottery changed ownership twice in the following six years. However by 1989, when the Belleek Visitors Centre was opened, the company was in a much stronger financial situation and was acquired in 1990 by “Erne Heritage Investments” owned by Dr George Moore. Originally from Dundalk Dr. Moore lived in the United States where he controlled many business interests.

The new management team of John Maguire (Managing Director) Martin Sharkey (Financial Director) Arthur Goan (Operations Director) and Hugh Quinn (Sales Director) oversaw the rapid expansion of Belleek into a group of giftware brands including the acquisition of Galway Irish Crystal in 1993. The acquisition of Aynsley China in 1997, a long established Stoke-on-Trent pottery firm. In 2000 Belleek again added to its company portfolio with Donegal China joining the group. 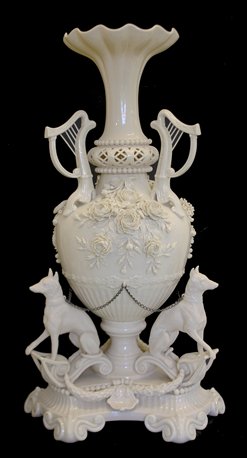 In 2003 Belleek diversified its product range by establishing a new brand called “Belleek Living” This fresh contemporary gift and casual dining collection seeks to give the modern Belleek customer product to compliment their décor and lifestyles.

The company passed a significant milestone of 155 years in business in the year 2012. To mark that year Belleek re-introduced a limited edition of five International Centrepieces. This is the stunning piece that won a gold medal at the L’Exposition de Paris Exhibition in 1900.

In 2017 Belleek celebrated its 160th anniversary by introducing a limited edition of sixteen iconic designs from the archives, each representing a decade of Belleek’s  design history. This was headed by the “Group of Greyhounds” designed by the Rev. Halahan Dunbar sometime before 1867.

Belleek continues to create new and exciting designs mindful of its history craft and heritage but seeking to create products both decorative and useful for today’s generation. The Company is proud of its contribution to the artistic, commercial and business life of Ireland both past and present. It is a company both forward thinking and ready for the challenges that the future will bring.