When you step into the world of Belleek Pottery you enter one of Northern Ireland’s oldest and most fascinating attractions. Original and unique pieces are made using traditional methods passed down from generation to generation.

Established in 1857 Belleek Pottery holds a very special place in the cultural and commercial heritage of County Fermanagh. Nestling on the banks of the River Erne this imposing building is home to the world famous Belleek Fine Parian china and also to one of Irelands top five visitor attractions.

Tours have been coming to Belleek Pottery for decades. Discover the secrets that have made Belleek Pottery one of the most enduring success stories of Irish Craftmanship with a visit to its award winning visitor centre.

The building which, up until 1988, was used to produce Belleek has since been refurbished internally and features a museum, tearoom, video theatre and showroom.

Upon entering the Centre our guests will first see one of the oldest and most prestigious pieces of Belleek ever made. It is called the Belleek International Centre Piece and was displayed at the Paris Exhibition in the year 1900 where it was awarded its fourth gold medal.

The International Centre Piece is believed to have been designed by Frederick Slater who came to Belleek in 1893. It is reported to have taken him seven weeks to create the masterpiece. The creation stands 28 inches high and over 16 inches wide at its widest point. The urn shaped vase is exquisitely decorated with flowers (believed to have been made by William Henshall) and Irish Harps and it rests on a scrolled base which also supports three Irish Wolfhounds. Behind the harps, and forming an integral part of the vase, is a beautiful example of pierced work which would have been popular on a number of early Belleek designs.

The International Centre Piece takes centre stage in the Foyer and, displayed with it, are replicas of the medals.

It is indeed a truly amazing piece in every way. 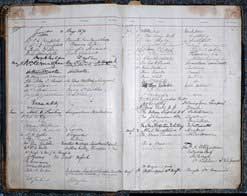 The Earls of Lanesborough were extensive landowners in both Ireland and England and held estates in Co Cavan and Fermanagh. The villages of Newtownbutler in Co Fermanagh and Butlersbridge in Co Cavan are named after the family.

George Frederick Upton sat as a Conservative MP for Antrim from 1858 to 1863. In 1866 he became an Irish Representative Peer and sat in the House of Lords as Lord Templetown.

We cannot know if the Visitors Book was purchased specially for the visit of these important visitors but the arrival of such well-connected persons would have certainly been considered well worth recording to impress other visitors who in turn would also record their names.

In the weeks and months that followed many other important visitors are noted. Lord and Lady Enniskillen, Miss Brooke of Ashbrooke Co Fermanagh along with Miss Bloomfield daughter of John Caldwell Bloomfield of Castlecaldwell. Late in December 1868 Mr Richardson the High Sheriff of Co Fermanagh also visited the Pottery.

The first visitor from England is Archibald Anson from Longfield Rectory in Derbyshire signed his name in January 1869.

This entry is followed by a long list of persons from the titled aristocracy of the day to the landed gentry to visitors to the locality.

This latter category would increase in volume over the next decade with the popularity of travelling by train on holiday excursions.

The railway connection from Belleek opened in 1866. Another category visiting were returned emigrants who had made good in the New World and were able to travel back across the Atlantic, to visit the land of their birth. These included Rev William McNulty of Passaic, New Jersey visiting Ballyshannon, also Thomas McElderry Sinclair and his wife Caroline of Cedar Falls, Idaho visiting their families in Belfast.

Today we are ever mindful of the potential of tourism and in particular Belleek has been successfully attracting large numbers of visitors over the last twenty-five years with its Visitors centre and factory tour that encompasses every aspect of the making of Belleek fine porcelain. So it is perhaps surprising that the founders of Belleek had already seen the potential of attracting visitors.

The visit of The Earl & Countess of Spencer, the Lord Lieutenant of Ireland and his wife on May 12th 1870 was a remarkable event and it gave the fledgling Pottery an tremendous endorsement by the Viceroy, Queen Victoria’s representative in Ireland. He later placed an order for a dinner service with his family crest and a porcelain tea service of the Echinus pattern also with his family crest.

His visit is recorded by a report printed in the Irish Times. 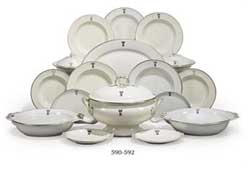 Part of the Earthenware Dinner Service with the Spencer Crest purchased by the Earl Spencer.

The book continued in use up until sometime after the last recorded date of August 31st 1884. The last page with signed names is not dated. As the book is not completely filled out we can only surmise that sometime soon afterwards the book was either taken, mis-laid or a decision made to no longer record Visitor names.

The complete story is still a mystery but the presence of the book is both a gem of Pottery history and a great source of social history of the latter half of the 19th Century.

We acknowledge the efforts of two members of the Belleek Collectors International Society to purchase the book and to give it to Belleek Pottery on loan to display in the Belleek Visitors Centre Museum.

Stay up to date with the latest news from Belleek

A special plate was made to mark the occasion and limited to 5oo pieces. It was designed by Fergus Cleary Head of the Pottery's design team and it incorporated a cluster of scallop shells on the outer rim a reminder of many of the Pottery's early designs incorporating Marine themes. The central portion displayed the Belleek trademark used by the company since its earliest production in the 1860s.

The First Belleek Collectors Convention was held in Los Angeles in February 1993. There were over 275 attendees with representation from eighteen chapters including those from the United States, Canada, United Kingdom and Northern Ireland.

The Convention was also attended by many of the Hall of fame Honourees and President of the Belleek Collectors International Society Mrs Angela Moore addressed the assembly remarking that it was exciting to be part of such an enthusiastic group of people.

A special plate was made to mark the occasion and limited to 5oo pieces. It was designed by Fergus Cleary Head of the Pottery's design team and it incorporated a cluster of scallop shells on the outer rim a reminder of many of the Pottery's early designs incorporating Marine themes. The central portion displayed the Belleek trademark used by the company since its earliest production in the 1860s.