Figure of Erin (Hibernia awakens from her Slumbers) 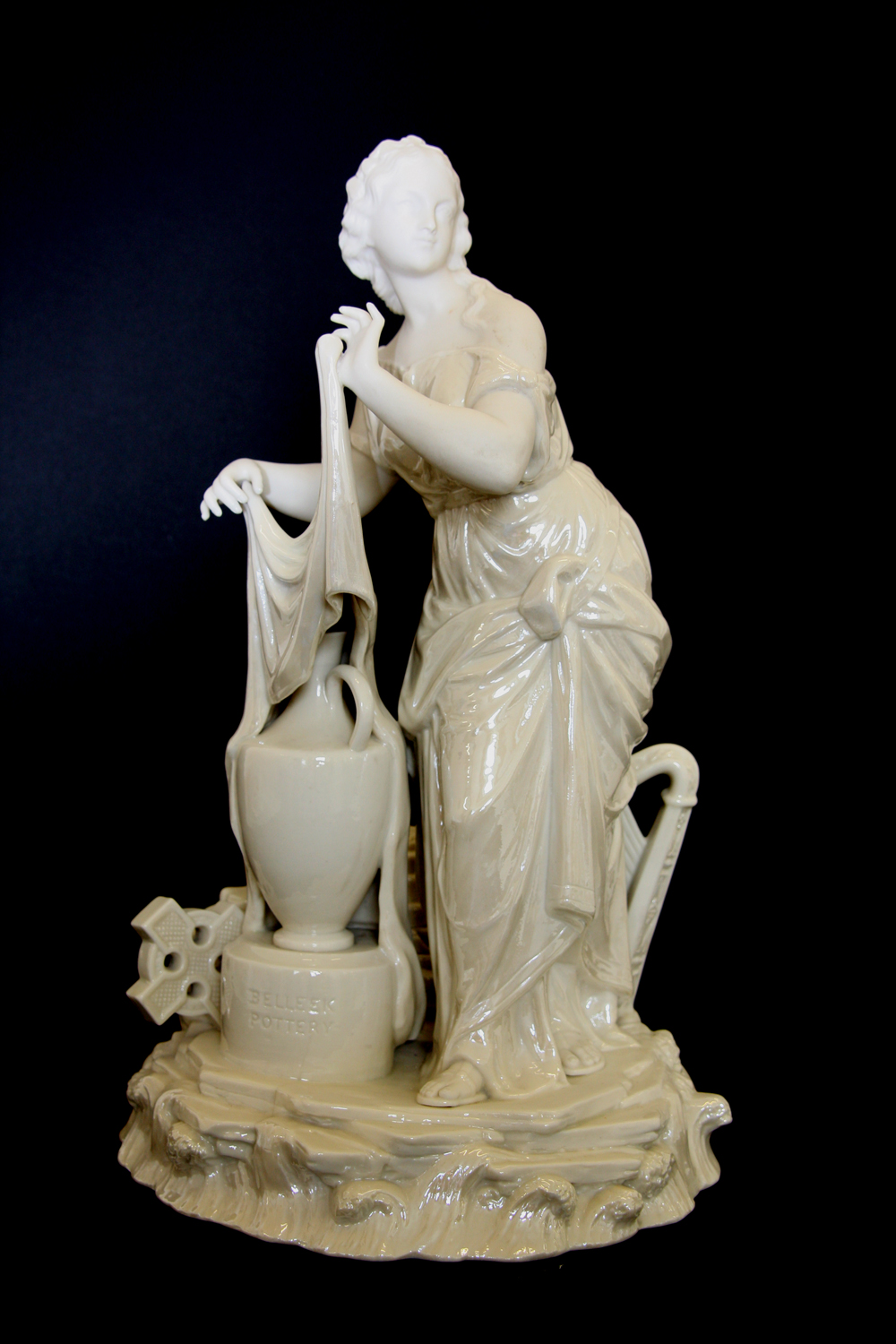 “Erin unveiling her first Ceramic production. The base of the figure represents the flagstones of the fall on which the Pottery is built and from which the town and the products of the Pottery derive their name.”

This is how the figure was described in a Belleek Catalogue published in 1928. William Boynton Kirk  (1824-1900) a Dublin born sculptor designed and sculpted this wonderful allegorical piece for Belleek in the late1860. He studied sculpture at the Royal Dublin Society and exhibited at the Royal Academy 1848-57.He was the son of an eminent Dublin sculptor Thomas Kirk and he worked for many years with Kerr& Binns of Worcester later to become Royal Worcester.

In 1860 he entered the Ministry of the Church of England becoming a vicar of Holy Trinity, Birkenhead and later of St. Peter’s, Ashton-under-Lyne.

The piece also known as “Hibernia awakens from her slumbers” portrays a serene and beautiful lady “Erin,” representing Ireland and is unveiling a vase symbolising Belleek Pottery.

She stands on flat stones surrounded by water depicting Rose Island, where the Pottery was built. (The island no longer exists due to the work of the Erne hydroelectric scheme of the early 1950s).

Thus “Erin” introduces Belleek Pottery to the World and proclaims its merit and excellence.

Here we tell the story of the first time Erin was exhibited at the Dublin Exhibition of 1872.

In 1870 Sir Arthur Guinness, later Lord Ardilaun and Cecil Guinness, later Lord Iveagh, bought what was known as the Earlsfort Terrace building in Dublin. The building was later demolished in 1918, the site of which is now part of the National University of Ireland.
In December 1871 they placed the buildings at the disposal of the committee for the purpose of holding an exhibition of arts and industries. The committee of the Dublin Exhibition announced that an exhibition of Arts, Industries and Manufactures would take place in 1872. Their guiding principle would be that:
The Exhibition was to be more especially devoted to illustrating and promoting the resources of Ireland, and with that object in mind a separate and important portion of the building (the extensive series of Buildings forming the Exhibition Palace), known as the ‘Leinster Hall’, was set apart exclusively for the Irish department of the Exhibition. British Productions and those of other countries were to occupy the Main Glass Building. The Loan Museum was to be placed in part of the Permanent Building.  The Duke of Edinburgh opened the exhibition on June 6th 1872. In the following months over 420,000 visitors would come and visit 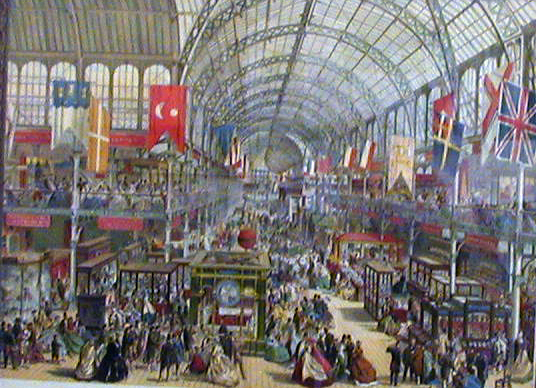 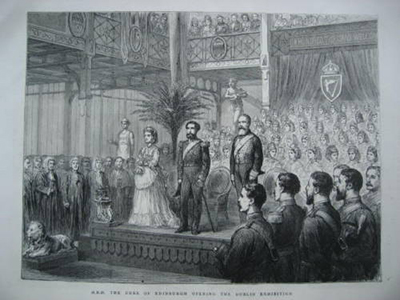 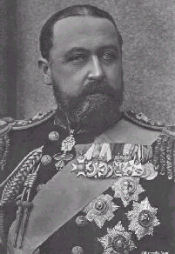 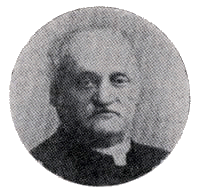 Along with other Irish industries the fledgling Belleek Pottery exhibited in the Leinster Hall and sent a large selection of products including a number of Parian figurines, table centres and comports.

In the 1865 exhibition held in the same building, Belleek had sent a number of apprentices to demonstrate their craft and displayed

Now seven years later Belleek would unveil an impressive number of porcelain products and demonstrate to all that Belleek had arrived on the world stage.

One of the most imposing pieces on display was the Figure of Erin, an allegorical piece also known as “Hibernia awakens from her slumbers” The piece depicts a young maiden, “Erin or Hibernia” unveiling a vase with the script on its base “Belleek Pottery”. Thus Ireland was unveiling to the world the work of Belleek Pottery. It was designed and sculpted by Dublin born William Boyton Kirk

From the Biography of Irish Artists 1913

Second son of Thomas Kirk (q.v.), was born on the 29th May, 1824. As a boy he showed marked talent for sculpture, and his father was desirous of placing him as an apprentice with Chantrey who, however, refused, saying that he thought the boy’s father would be his best teacher. He was sent to the Dublin Society’s School as a pupil in April, 1839, and also worked in his father’s studio in Jervis Street. In 1845 he entered Trinity College, but left without taking his degree. He made his first appearance as an exhibitor in the Royal Hibernian Academy in 1844. His “Iris Ascending,” now at Marlborough House, was exhibited in 1846 and was purchased for fifteen pounds by the Royal Irish Institution. He had, however, little desire to continue in his profession as a sculptor, his one wish being to become a clergyman, a wish ultimately fulfilled. But for some years he worked at his profession and was made an Associate of the Royal Hibernian Academy on 16th February, 1850. Besides groups and busts he did a large figure of “Justice” for the Courthouse in Belfast; he designed the Shakespeare dessert service for the Worcester China works, which was shown in the Dublin Exhibition in 1853, and also several figures—”Erin,” “Winter,” “Summer,” etc., for the Belleek works. He was an exhibitor in the Royal Academy 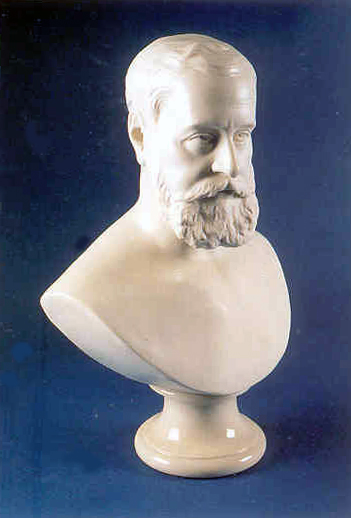 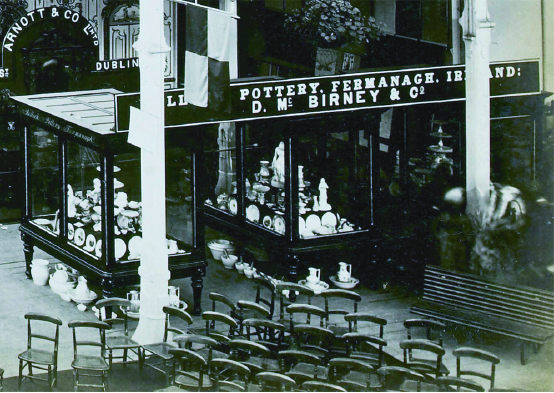 Picture of the Belleek stand at the Dublin Exhibition 1872. Figure of Erin is in the cabinet on the extreme left. 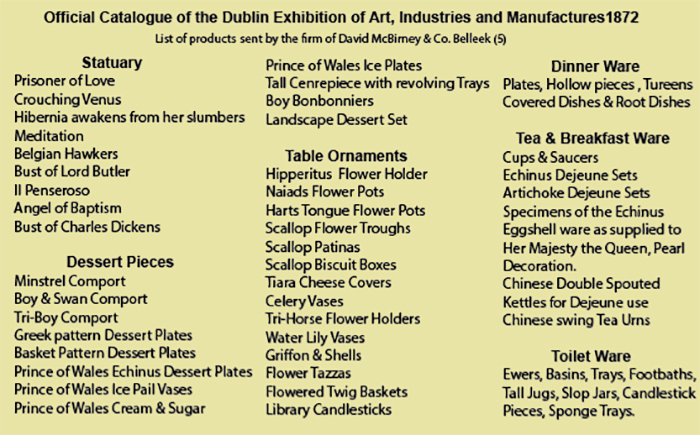 List of the items sent by Belleek to the Dublin Exhibition